Music and great times were had with the Elks Club Jazz Group, in Riverside California. 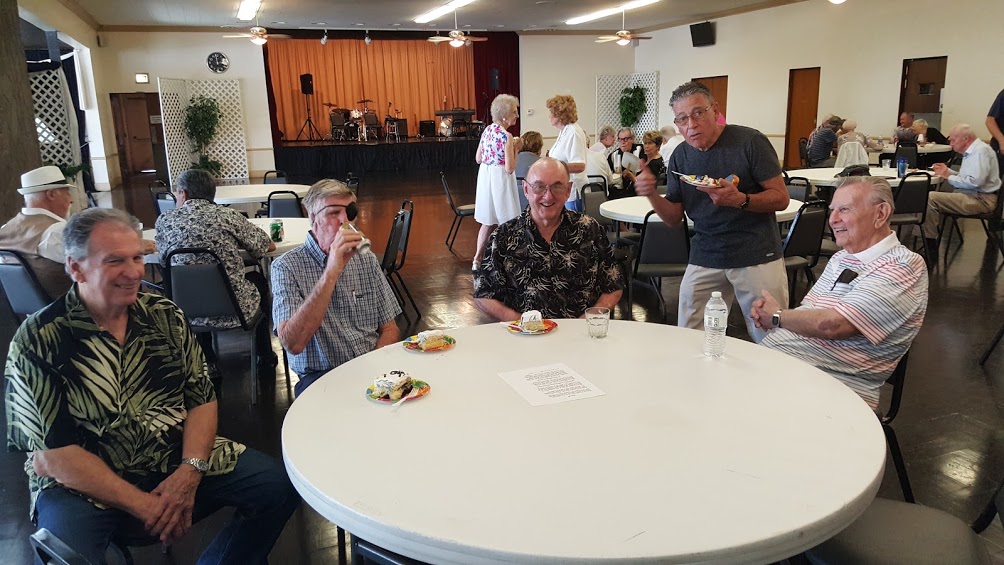 We had some great musical times at the Elks Club Jazz Group Band functions held in Riverside, CA.  We met once a month, and many talented artists performed in the open stage-mic venue.

This picture is of the nucleus of the band.  They are all professionals, having played with the greats.  Al Drummed, the drummer and soloist, far left; Tommy Wheat, fabulous jazz guitar player, sitting in the middle of the table; and Ken Taylor who plays perfect base, great guitar and sings, is on the far right.  They all continue to perform at local parties and social functions.  Fred Massey is siting between Al and Tommy. He is a professional key board player. Between Tommy and Ken is Burnie, another drummer that often sits in.

You may not know, but there are 4400 possible guitar chord formations. At least that’s what I was told by the bass player Ken. Tommy Wheat, knows all the chords and all the music. He was a personal guitar player for Frank Sinatra and still he remembers all the jazz standards, and more, and can play the music in any key.

I had the distinct pleasure to sing with this band many times, and although this particular event is canceled, I look forward to singing with them in the future.

The old joke is that the jazz players arrive at the gig in a Volkswagen, and the blues players arrive in a limousine. Jazz has always been the media for the intellects, and these players are no exception. The music arrangements are subtle, difficult to play, and wonderful to hear. Jazz music has stood the test of time. for example, the music Billie holiday sang is more alive today, and better known, then when she was performing it.